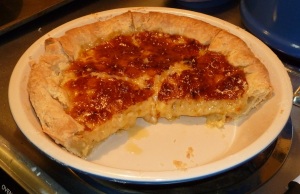 Put the flour in a bowl. Cut the butter into small pieces. Add it to the bowl with the water, egg, and salt. With a fork, work the mixture until it resembles coarse meal, adding a few more drops of water if necessary. Dump the mixture onto a work surface and knead slightly just until the mixture holds together. Shape the dough into a disk and wrap with plastic wrap. Refrigerate the dough for 30 minutes. Let the dough soften for 5-10 minutes. Lightly dust a work surface with flour. Roll out the dough, starting from the center and moving to the edges, to an 11-inch circle, adding a sprinkling of flour when necessary to prevent sticking. Carefully transfer the dough to a 10-inch pan, centering it. With your fingers, smooth any wrinkles. Trim the dough edges even with the pan. Refrigerate until ready to use.

Preheat oven to 400°F. Peel and dice the onion. In a skillet, melt 1 T butter over medium heat and sauté the onion until soft. Transfer to a bowl. Cut off the Camembert rind. Cut the cheese into pieces and crush well using a fork. Add to the bowl and mix well with the butter and sautéed onion. Season with salt, pepper, and paprika and cool slightly. Stir in the egg. Spread the cheese mixture evenly in the crust and bake the tart until golden brown, about 25-30 minutes.

From Quiches and Savory Tarts

First of all, Camembert is VERY SMELLY cheese. You don’t think so when you smell it at the cheese counter. You don’t think so when you smell it again because half of your house smells disgusting and you wonder if it might be the cheese. You concede that it is, indeed, the cheese when you isolate said cheese in an ice chest in the garage and the smell dissipates from the house and moves into the garage, concentrating in the ice chest. It was so smelly that it gave me (Katie) a headache. However, we thought that maybe it was one of those cheeses that tastes delicious even though the smell is less than desirable. Not the case.

We can probably move away from the smell of the cheese, ignoring the fact that the outside garbage can now smells like Camembert rind and garbage day is on Wednesdays. Let’s get on to the taste. Unfortunately, it really tasted like it smelled. I don’t think there are words to describe the nastiness that was the flavor. The texture was also not helping any, but we decided that we probably should have let it set up longer before eating. However, it was already about 7:45 by the time we got done making it and we were hungry. I ended up scraping out the filling and eating the pie crust by itself.

Let’s end on a good note. The pastry was delicious! It’s some of the best Gray has ever made! He’s been making pie crusts for a couple of years now whenever we have occasion to make a pie, because we both think homemade pie crust is entirely more delicious than store bought. At least the crust is a keeper!

P.S. The recipe said you could substitute Brie in place of the Camembert, and we might try the recipe again this way seeing as Brie is an awesome cheese and superior to Camembert in every way…