Peel pears leaving stems attached. Flatten the pear bottoms by cutting off a thin slice from each. Stand pears close together in a large saucepan or casserole. Add red wine, Marsala or sherry, 1/2 cup sugar, and lemon zest. Bring to a boil. Reduce heat to medium and cover pan. Cook pears 25-30 minutes or until tender, basting several times during cooking. Place

pears in a glass bowl or platter. Let stand at room temperature until ready to serve. Add 1/4 cup sugar and lemon juice to liquid in pan. Boil until it has the consistency of syrup, 15-20 minutes. Spoon hot sauce over pears and serve. Makes 8 servings.

Place pear halves, cut side up, in a shallow 1-qt. baking dish. Place butter in the center of each; drizzle with lemon juice. Combine sugar and cinnamon; sprinkle over pears. Top with marmalade. Cover and bake at 350°F for 15-20 minutes or until heated through.

From allrecipes.com by Betty Schledorn

Today you get two recipes! We decided to have two pear recipes to try out different cooking methods. The poached pears are from our cookbook selections and the baked pears are a new recipe we found… *whistles and looks around innocently* Noooo, we aren’t collecting more recipes! 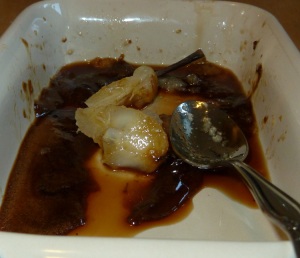 Gray said they weren't that good...

The poached pears were delicious! I thought they were slightly harder to make, but still not very complicated. Our pears were really poached in only sherry because we wanted to use some sherry that we can’t even remember how long ago we bought. Since we did not add any dry red wine, ours were quite sweet. We didn’t think the pears themselves were too sweet, although after boiling the sherry down for 10 minutes, it was VERY sweet. I poured it over the pears and then when it cooled, it turned into candied sherry, like caramels or something semi-hard. It was too sweet to eat, but the pears got the flavor from the poaching and the coating that stayed on them when we poured the sherry sauce over them. Awesome recipe, although if making again I’d use the dry red wine as well.

We took the baked pears to a party this weekend, and they seemed to be a hit. The hardest part was peeling all the pears (we made four pears). The pears we used for this were Bartlett pears, and weren’t quite as ripe as the Bosc were. I cooked them longer than the recipe said, and then they were fine. We found them a little difficult to eat, as the rounded side was down, so most of us turned them over to prevent slippage. Overall it was a great recipe too!

I have to say that we never imagined that cooked pears would be so delicious. Why have we never made them before?! I hope you will take whichever one of our recipes you prefer, and try pears prepared a little differently yourself!