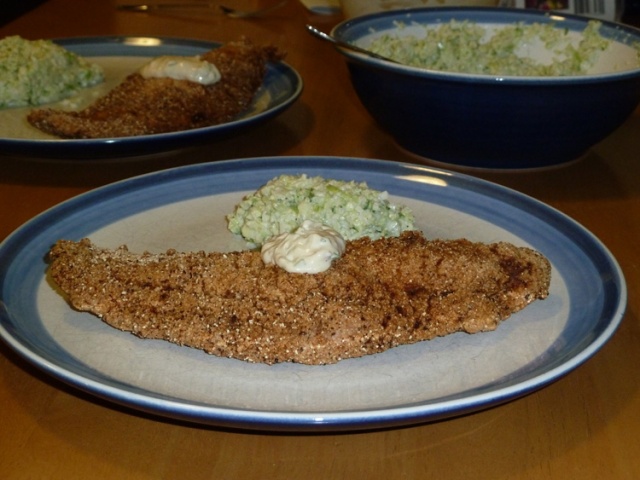 Preheat the oil to 365°. Beat together the egg and buttermilk in a small bowl, then add the seasonings.  In a separate bowl, mix the flour, meal, salt and pepper. Pass the catfish fillets through the drench and coat well with the dredge.  Fry several minutes until the fillets float and are a golden brown.  Drain on paper towels and serve immediately.

Gray:  This was a great recipe, but I have a confession to make, it wasn’t exactly like this in the cookbook.  The actual recipe I used was for fried oysters, but Justin Wilson devotes a whole section of the seafood chapter to how to fry seafood, and how to make up various drenches and dredges.  He also said that catfish was his favorite fried seafood, so I really wanted to pay him homage by making fried catfish.

I set everything up so I could fry the fillets in my cast iron skillet.  I made sure I had enough oil, and I tried to be careful with adding the fish to the pan, but I still managed to spill a little bit.  I think that I might cut the fillets into smaller portions to ease the frying if I do this again.  We very rarely fry anything at home and every time I do, it always seems like it is a lot of trouble.  I personally think that there are so many other ways to do seafood (or anything else for that matter) that are just as good and a lot less messy.  That being said, I am getting better at organizing things so that I don’t make as much of a mess and can be more efficient.

This turned out delicious and had a very nice thick crust that was crunchy and not hard or tough.  The corn meal and seasonings were great.  I am going to try to duplicate this in a oven-fried type of recipe to see if we can get something similar that is easier and lower calories as well.  This is a two-part recipe, and next time we’ll have a delicious tartar sauce to go with your fish.

Katie: Wow, was this good catfish! I loved it! I don’t usually like fried seafood, because it is often heavy and upsets my stomach. Even though this was fried, it seemed not to be greasy and heavy like so many fried seafoods. I thought the crunchy crust was just perfect on the flaky fish. Gray did an awesome job on this! I can’t wait to talk about the tartar sauce next week!