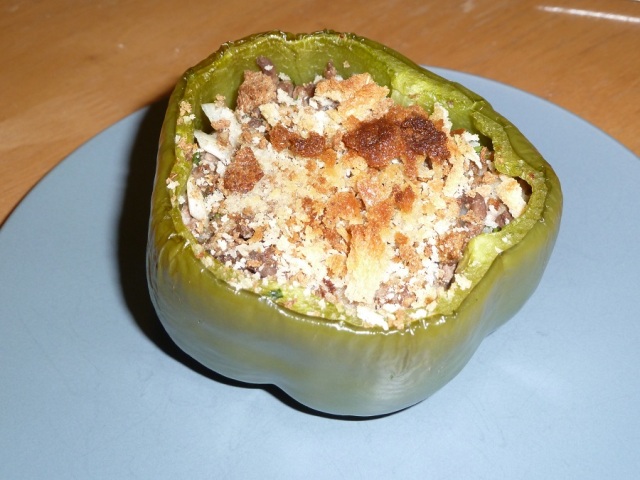 Parboil peppers for stuffing. Fill with one of the stuffings listed below. Place in a casserole or baking dish and bake in a moderately hot oven (375°F) for 25 minutes. If you like, serve a Spanish or tomato sauce.

Gray: I was thrilled with how these turned out.  We had tried to make stuffed peppers before, but they are sort of tricky to have all the components come out right.  This recipe nails it.  It was easy and very tasty.  I think this is one of those dishes that has a cool presentation because it is neat and self-contained.  Everyone gets their own pepper.  I think having a tomato sauce to go with it would be a great idea.  We tried several, and I liked ketchup the best, but a less sweet tomato sauce would have been perfect.  Enjoy!

Katie: I wasn’t super excited about making stuffed peppers when Gray suggested it, because the last time we tried it by the time the meat was done, the peppers were burned. But I was game to try a new recipe. The parboiling really helped the peppers, which ended up being the perfect tenderness and cooking the meat before putting in the peppers made a huge difference too. I thought with nothing added that they were a little dry, but I added some original Cackalacky sauce and that just made it taste so much better to me. Gray tried several different sauces and ended up preferring ketchup. I would definitely make these again, but probably add some sauce in the meat mixture before stuffing the peppers.